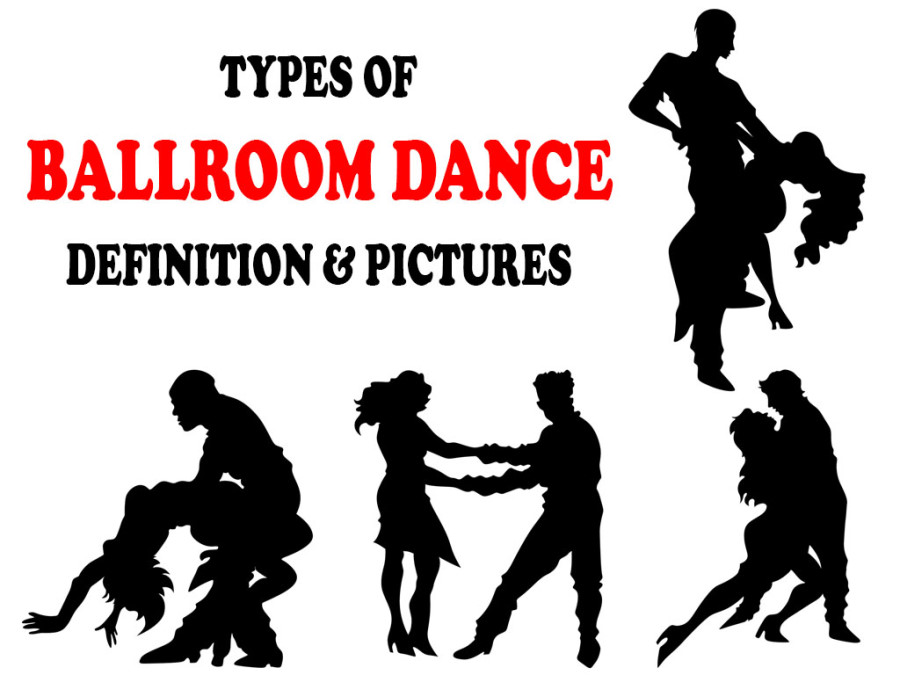 We have several types of ballroom dance, which need you to take practice and skill to master. Each differs in techniques and rhythms, but they all feature elegance and emphasize posture. In other words, it’s a form of dance allowing couples to move with patterned dancing steps.

Even if you have never taken these dancing lessons, you may have heard about their names before. So which one is the best for you? Let’s dig more into them now in this post today!

As ballroom dancing gets mentioned, people think of a couple performing various dance styles followed by patterns of steps. Some common examples here are Waltz, Tango, Quickstep, and Foxtrot. As you think of it, the dances are different from dances in the past.

In the past, these forms got mentioned in Jehan Tabourot’s book named Orchesographie. This book is about the study of social dance during the French Renaissance.

Ballroom dancing has its roots in England in the early 19th century. Around that time, these dances got performed by the elite classes of society at parties. However, to the early 20th century, it turned into a trend among the working and middle class. People usually perform ballroom dancing for gatherings and events in public halls.

Different Types Of Ballroom Dance With Their Origin

These include Waltz, Tango, Foxtrot, Quickstep, Rumba, Cha-Cha, Samba, Viennese Waltz, Swing, Mambo, Bolero, and Jive. However, based on which part of the world you live in, the dances could be different, so bear that in mind.

We have gathered the two most popular dance styles in order: American style and International style.

To many people, the word “Standard” indicates “Modern” and is usually termed “Ballroom”.

Now let us explain types of ballroom dance that fall under each style with a short introduction. 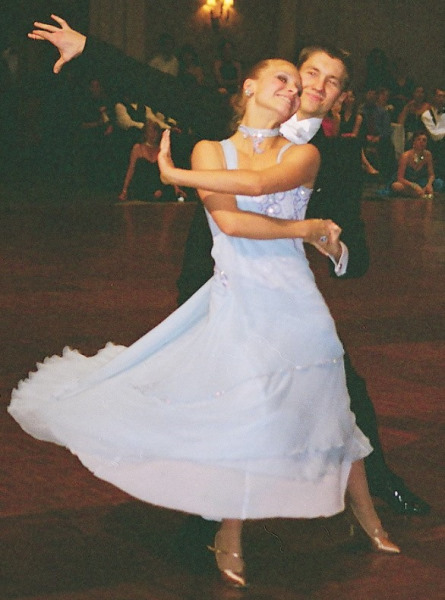 Waltz has been developed out of the folk music of the Western region in Austria. It’s a smooth dance with elegance in which “rise and fall” movements stand out in the whole line. This dance involves two people facing each other and doing six steps rhythmically around the floor.

The lead dancer puts his right hand on the other’s left shoulder and then starts dancing. This popular dance usually gets performed at weddings and other special events. 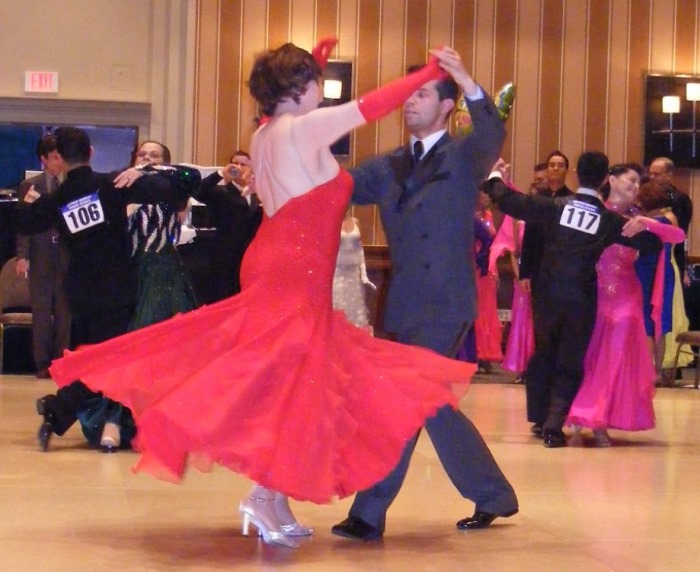 Foxtrot is an early 20th-century dance that originated in the 1-step, 2-step, and syncopated ragtime dances. The dancers use long walking motions and quick steps to glide across the floor.

Unlike Waltz, it’s one of the most popular ballroom dances worldwide. Foxtrot also requires high expertise to master. Your footwork should be a pattern of long, slow steps and then short, quick steps.

As a dancer, you can be more expressive in your movements. 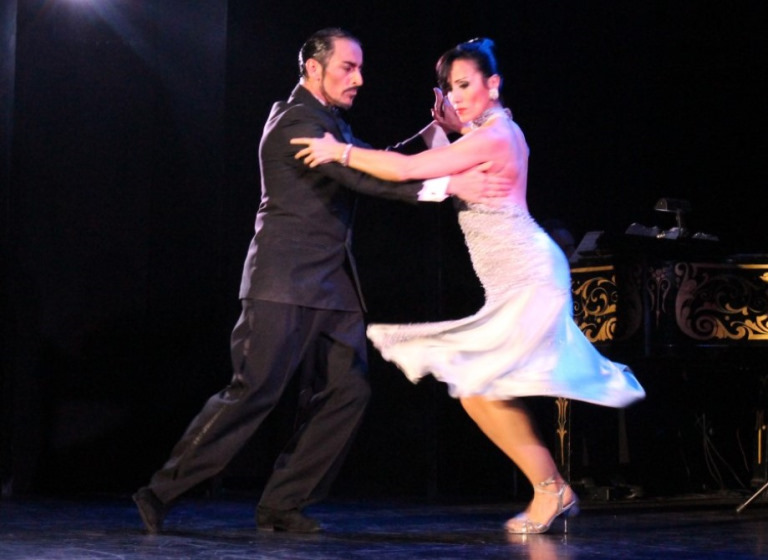 Tango appeared in the 1880s and has some influences from Cuban Habanera. If it’s about dances with a focus on vivid and playful movements, rich expressions, and passion, Tango is the winner. With “stalking” and “sneaking” characteristics, Tango becomes unique as compared with other dancing styles.

This cooperative form aims to impress and catch the attention of dancers and spectators. So if you like, the dance can give a sensual and visually interesting option for your first wedding dance! 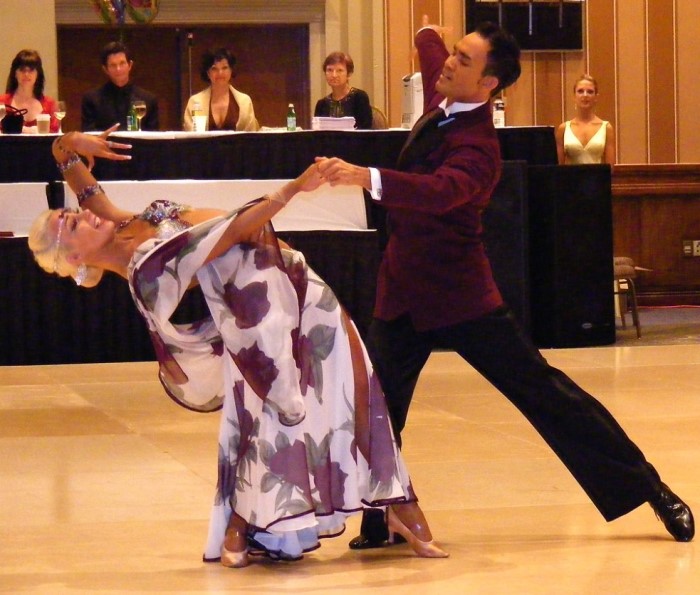 Now we have another dance emerging in the 2nd half of the 18th century in Austria, Viennese Waltz. The dance is a classic one that has got featured in several romantic movies and animations.

Unlike the strong Tango, Viennese Waltz is a graceful dance characterized by constant twirling motions around the dance floor. Although it’s not hard to master, the dance needs you to feel confident with Foxtrot and Waltz before learning it. 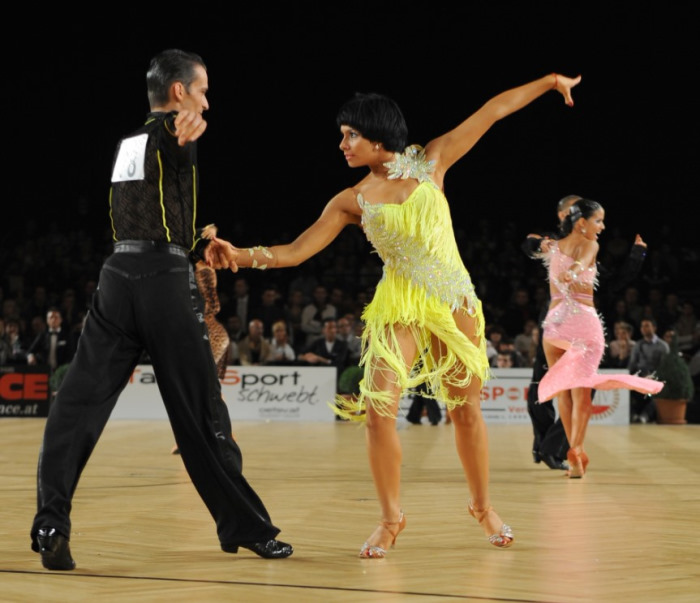 Initially introduced to the United States in 1954, the dance got mentioned as Cha Cha Cha. It is a flirtatious combination of movements as compared with other types of ballroom dance. It’s also a mix-match of other Latin ballroom dances, particularly rumba and mambo.

The dancers must keep the step and rhythm when they lead and follow in various motions and turns. Cha Cha is a vibrant and fun style that gets you moving dramatically on the dance floor. 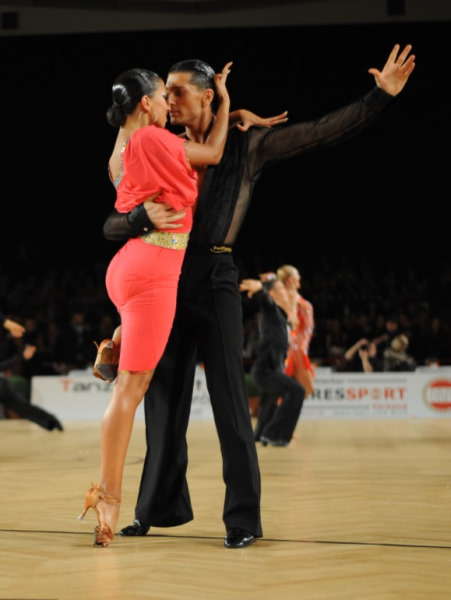 The dance showed up as a quick and sensual dance among the African slaves in Cuba in the 16th century. Rumba is a Latin dance style that concentrates on hop motions and footwork performed to the beat of the music. But it’s slower than a few other Latin dances, offering it a more romantic feature.

There are three styles of Rumba that appear a lot in dancesport competitions. They are the American rumba, the international style, and the Bolero. 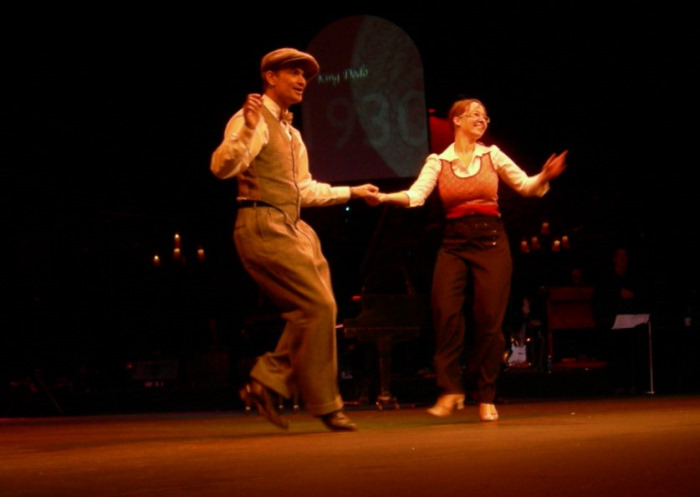 Whenever you love to learn a more energetic dance with your partner, then Swing is for you. It originated in Harlem in the 1920s with lots of swing styles. These include East Coast Swing, West Coast Swing, Charleston, and Balboa.

While doing it, you need to do some fundamental steps and then can have the freedom to make it your own. Swing gets characterized by lifts, spins, and flips, so it’s quite fun to dance and watch! 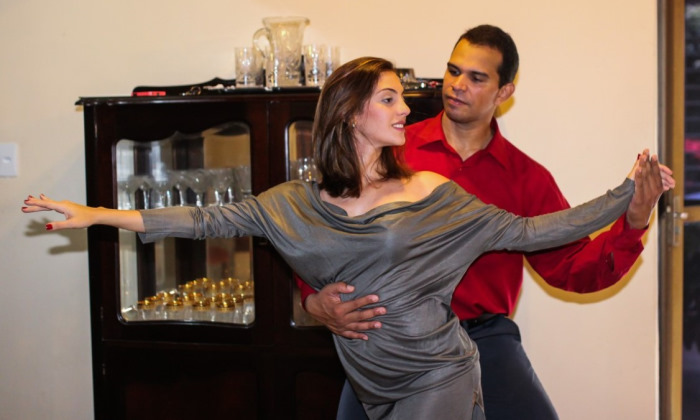 Bolero is a slow and delicate Spanish dance with origins in Spain and Cuba. The lead in this dance will mimic the motions of the toreador in a bullfight.

Like rumba, the dance gets performed in a box style. It features a glide to the side on the first beats. Next, you can do the medium distance following the basic step.

It’s a contemporary dance showing effortless but physically demanding. Bolero also combines the rise and fall of the Waltz, the Latin music, and the body motion of the Tango. 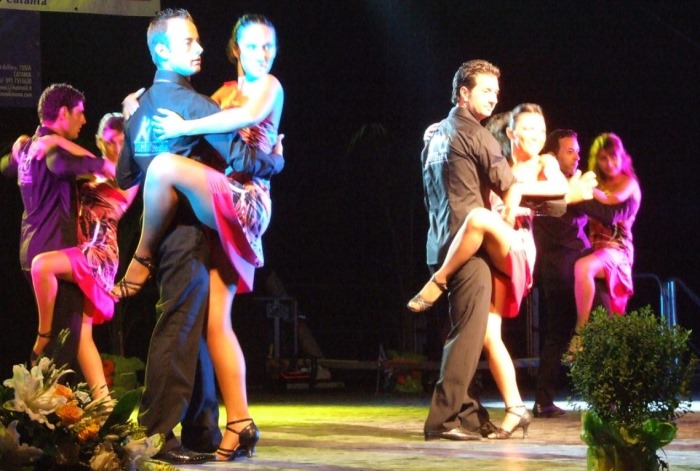 Having its roots in Cuba in the 1930s, Mambo gets favored through different parts of the world. The dance is a vivacious mix of Latin dancing styles and involves unique hip movements with arm wraps.

“Mambo” word here means “shake it”, so many people say that it’s a flirtatious dance.

For this reason, most dancers seem highly passionate when performing this dance. They sometimes dance to Mambo music, but usually to the old-style Salsa. 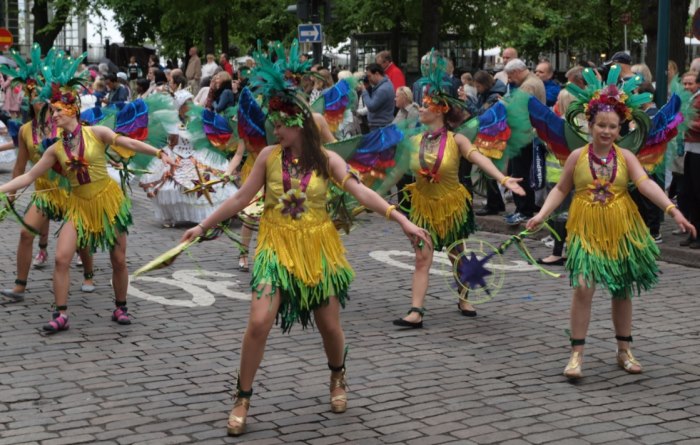 Samba is a part of the Latin dances in international style ballroom dancing. Its history takes you back to African culture and its music gets intertwined with Brazilian history.

Through this dance style, the partner will mimic the Brazilian carnival feeling, so there are many bouncing actions here. To begin the basic step, the leader steps forward or backward with either foot. The follower will follow these steps and steps back with the right foot and replace the weight on it. 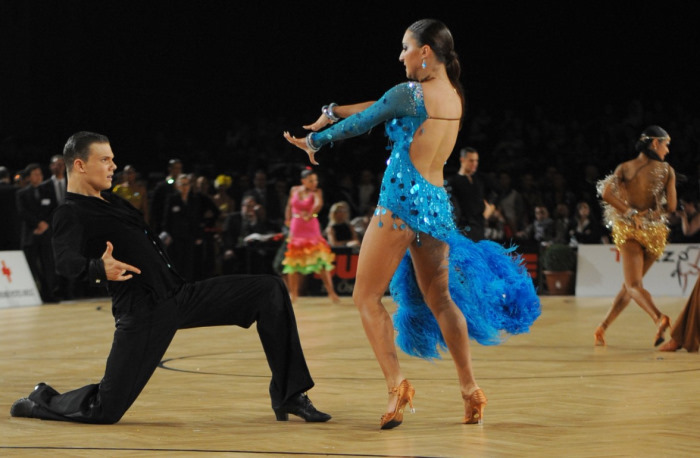 Among types of ballroom dance, Paso Doble is a dramatic and fast-paced one having the motions of the matador.

Starting in the 18th century, its music acted as an introductory theme for Spanish bullfighters getting into the ring. While dancing, the dancers stamp their feet in rhythmic patterns as a striking part of their performance.

In most competitions, modern Paso Doble gets mixed with other four dances such as Samba, Cha Cha, Rumba, and Jive. 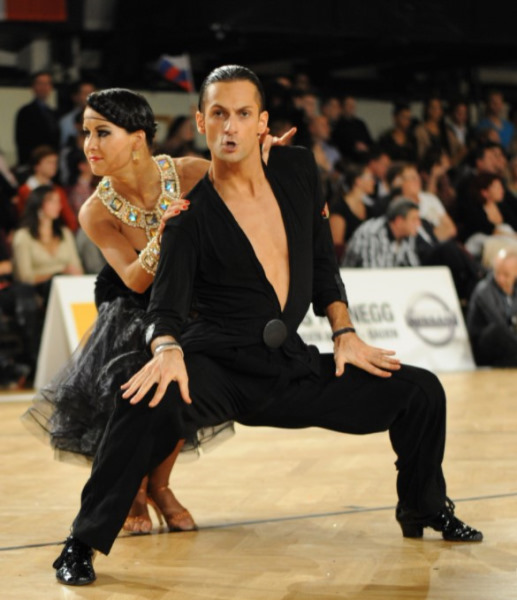 Jive differs itself from others with its several kicks throughout the dance. The dancers display lots of energy and personalities in their performance.

In ballroom dancing communities, Jive is known as a Latin dance style, but it’s also a part of the swing dancing group. As a lively dance, many of its basic patterns are like those of the East Coast swing.

Speaking of Jive’s history, it got initially introduced by Cab Calloway (American Jazz singer, dancer, and actor) in 1934. Not long after that, Jive became a common term for swing in the United Kingdom. 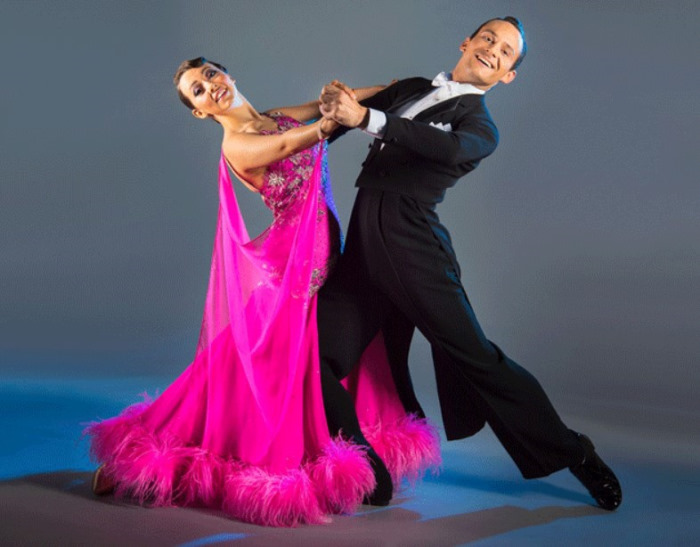 Emerging in the 1920s, Quickstep evolved from a slow Foxtrot to one of the iconic dances of the Jazz Age.

The dance impresses the spectators with beautiful chasses and lock steps. The partners should have hands clasped and on each other’s backs while moving across the floor. So this is a dance for those having high energy and who love to have a lot of fun.

Elegance and glamor are what we should talk about Quickstep. It appears energetic since the feet of the performances barely touch the floor. The body should get straight and strong through each motion.

Unlike the above types of dances, these types get seen and performed in Latin music. Many people love them as they’re entertaining and social to interact with each other.

Sure enough, each dance style is elegant and challenging in its way. This includes everything from Argentine Tango, Polka, West Coast Swing, Merengue, Lindy Hop, Bachata, Hustle, Nightclub 2-step to Country 2-step. 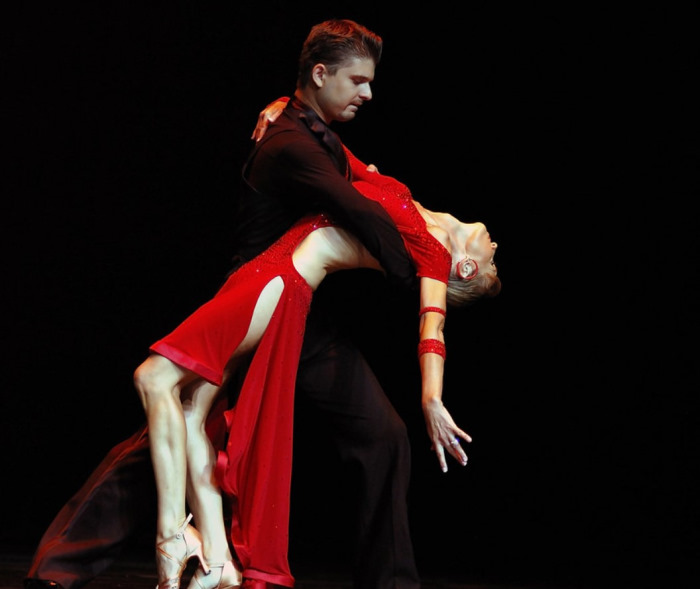 Tango is a graceful form of dance and the whole world loves it for its mesmerizing rhythm. Argentine Tango is often harder than ballroom tango since it requires creative skills to create a dramatic performance. 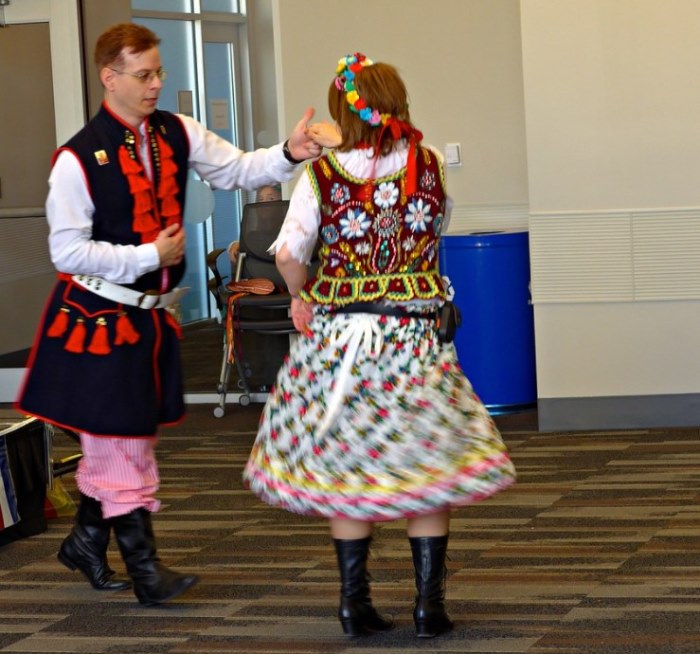 The vivid dance of Bohemian folk origin arrives! Polka involves quick steps and one hop to the music in 2/4 time. The dancers must take over space when revolving about the dance floor. 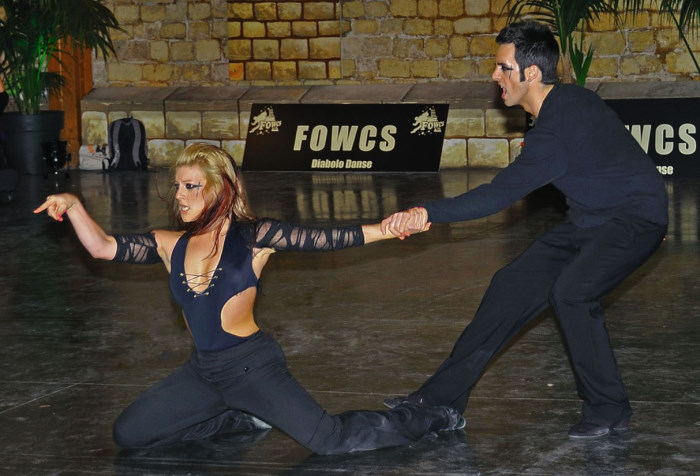 West Coast Swing is composed of two walking steps, two triple steps, and is characterized by an elastic look. It’s also a partner dance with origins in the Lindy Hop. 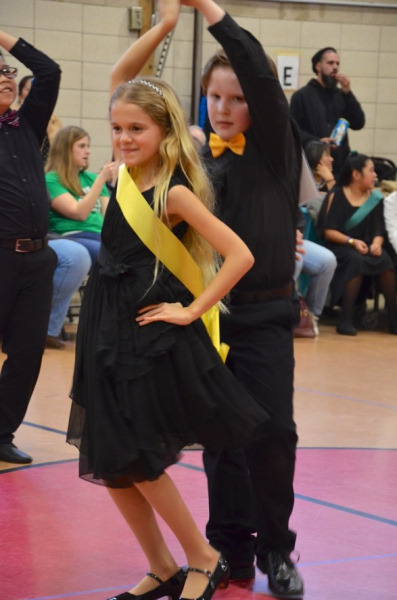 This type of dance was born in the Dominican Republic, representing the spirit of the country. The couples hold hands at the chest and move slowly in semi-circles to the music. 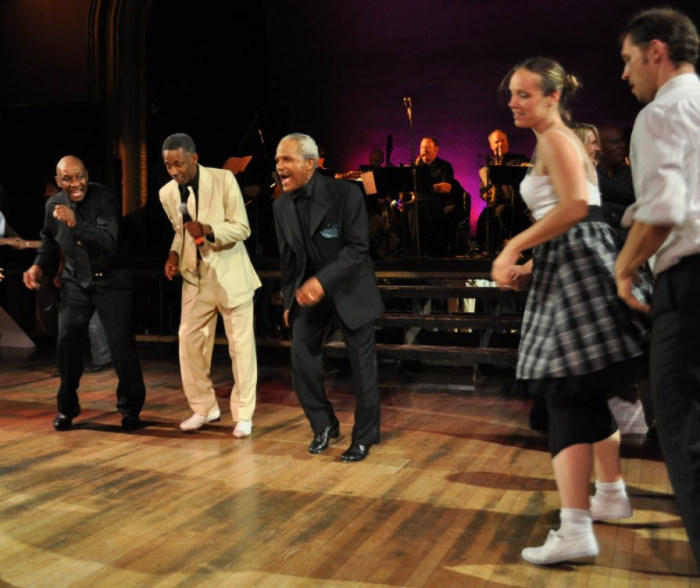 The Lindy Hop is a partner dance of swing dance originating in the 1920s and 1930s from Harlem, New York. The dance focuses on harmony, movement exchange, and music interpretation. 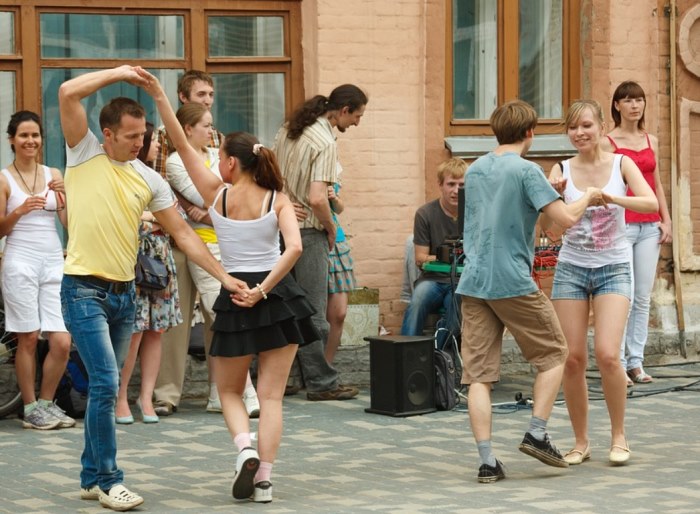 Bachata gets danced with tender hip motions and one tap. You can dance with or without bouncing or moving the body. Unlike Salsa, Bachata is a sensual and romantic dance that brings your partner close the entire time. 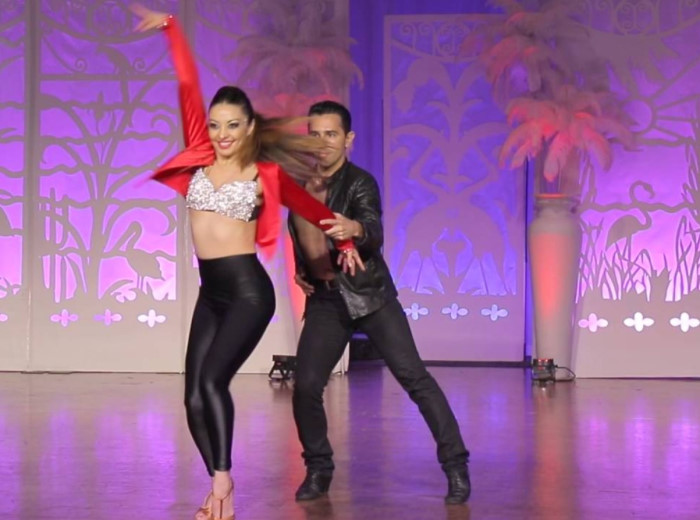 The hustle is a famous name for all disco dances that were famous in the 1970s. It gets made to be more dynamic and powerful. Today, it’s one of the best types of ballroom dance to impress your buddies within 30 seconds. 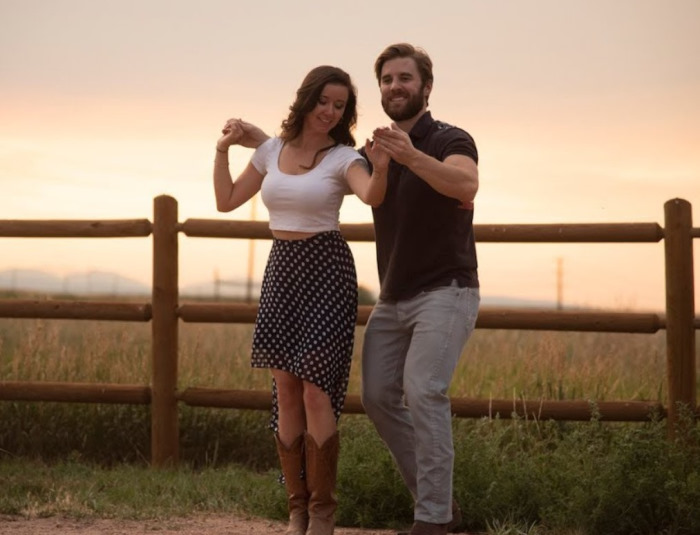 It’s a slow dance style that gets performed in nightclubs, parties, and wedding events. Feel free to dance to ballads and spice up your dance in front of your partner. 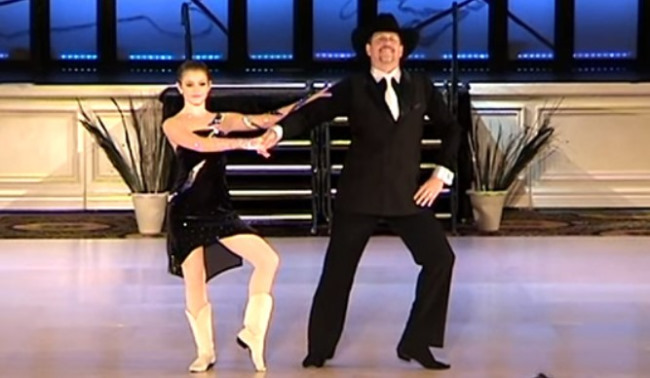 With origins in swing dance, Country 2-Step is one of the most popular dance styles in partner dancing. Try not to bounce when you dance but slide feet once you step.

1. How many types of ballroom dances are there?

There are more than 20 types of ballroom dance that get performed in international competitions. In this article, you can discover 13 traditional dances and countless non-traditional types of dance for people of all ages.

2. What is the hardest type of ballroom dance?

Viennese Waltz is one of the most challenging dance styles to master. It’s often over 4 times faster than the slow Waltz, but the steps are different.

3. What are the 5 famous ballroom dances?

There are five popular ballroom dances worldwide, including Swing, Waltz, Cha-Cha, Rumba, and Foxtrot. Once mastering these styles, you can dance with partners around the world.

4. What are the major Ballroom dance styles?

It’s the Tango that gets danced to 4/4 time music with a marching rhythm. The dance is a dramatic one done with cat-like motions to tell a story.

6. Is the Jive Latin or ballroom?

The Jive gets mentioned as one of the five ballroom dance styles making up the Latin dances. But it’s grounded in swing dance rather than Latin.

After reading this article, you may have known all popular types of ballroom dance and their definition. All of them are often seen in social competitions on stage and television. Through these dances, the partners move around the dance floor, transitioning from one place to another in a consistent pattern.

Now tell us which one is your favorite to express your emotions?